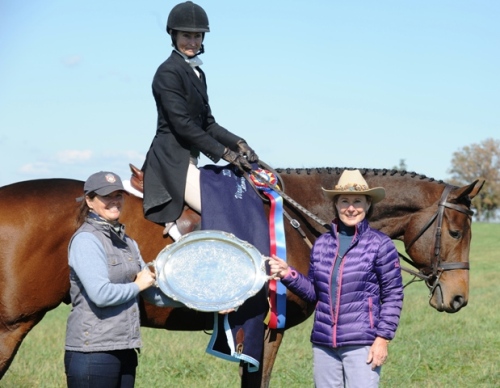 Tracey Cover from the Middleburg Hunt swept the boards at the 2013 Virginia Field Hunter Championship on Sunday, October 20 with her elegant bay, Brandywine. Judged Best Turned Out early in the day, she went on to win the 2013 Virginia Field Hunter Championship against a highly competent field of riders on some brilliant field hunters. The event had been postponed one week due to a three-day rainfall that dumped seven inches of rain on Virginia’s hunting country.

This year’s championships were hosted by the Blue Ridge Hunt at Woodley in recognition of Barbara Batterton’s win on Linda Armbrust’s Nicki in 2012. Woodley, the home of Brooke and Michelle Middleton, is the well-known venue for the Blue Ridge Hunt Point-to-Point Races and the Blue Ridge Fall Races. Spectators are able to view nearly the entire racecourse panorama from a gently rising hillside along the eastern edge of the course.

# Leslie Shepherd 2013-10-29 21:09
Elegant looking winners, and congrats to 'Barb, as I see that she had a super ride again herself. Would surely love to have seen a pix of her too. thanks FHL, great article.
Leslie Shepherd, Tallahassee, Fl.
Reply
Refresh comments list
RSS feed for comments to this post