Foxhunting and the Cavalry Spirit

This scholarly examination of how English foxhunting and European manège schooling influenced warfare as it was waged and as it evolved over the last three centuries of European conflict is extracted from the author's forthcoming book, Horsemen, Horsesoldiers, and Grand Illusions by Professor Caramello, for the readers of Foxhunting Life. 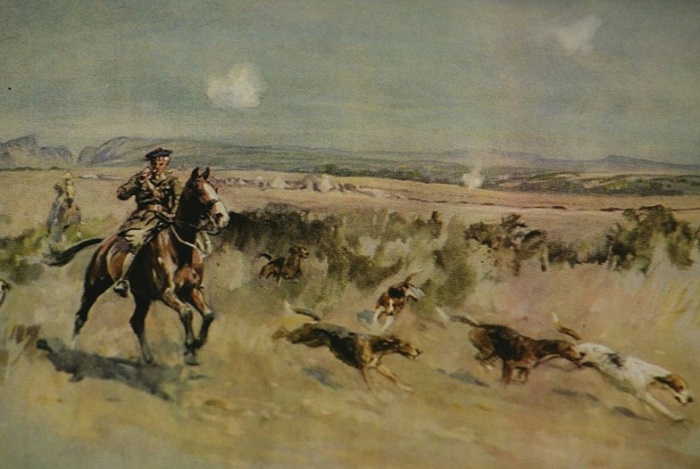 Hunting on the Salonica Front by Lionel Edwards

An earlier article titled, “Siegfried Sassoon, Foxhunting, and the Great War” (Foxhunting Life, March 27, 2019), focused on Sassoon’s Memoirs of a Fox-Hunting Man (1928) and its companion volume Memoirs of an Infantry Officer (1932), semi-autobiographical works of Great War fiction. It proposed that Sassoon, in those works, developed a complex and nuanced comparison and contrast between fox hunting in untroubled English “countries” and trench fighting in the “waste land” of the Western Front. It also pointed out that Sassoon did not invent this parallel between fox hunting and warfare, but, on the contrary, was visiting, intentionally and pointedly, a recurring theme in British equestrian and military writing in the 18th and 19th centuries and the first decades of the 20th century: fox-hunting as ideal preparation for cavalry service and leadership. The following article briefly sketches some aspects of that theme.