Foxhunters love to travel! If you have a good travel story, share it with FHL. Click on How to Submit.

Here are my personal checklists for foxhunting travel. Using them won't guarantee an incident-free trip, as I once discovered after leaving all my tack in the stable driveway. But barring such stupidity on your part, they will go a long way in assuring that you have what you need when you get there! Click on the printer icon to print the lists for yourself, and check off as you pack. And let us know what's missing, so we can add it for the next guy or girl.

The author discovers a new adventure on horseback that features good horses, wide open spaces, abundant wildlife, and a measure of risk.

Ten horsemen stood on the bank of the Mara River under the midday equatorial sun as Tristan explained the crossing.

“We must cross here and land on the far bank at that tree, you see. You must point your horse upstream so the current doesn’t carry you down to the hippos there.” 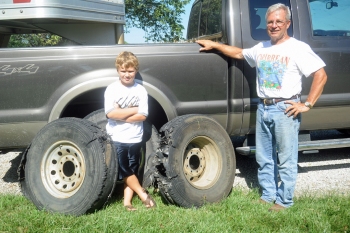 John Rera and Mo Trail, our first stop-over host, pose with the evidence.

The eternal query—where does the rubber meet the road?—was definitively answered at the witching hour last night. It meets the road in Beckley, West Virginia. And in East St. Louis. Let me explain.

We've embarked on the quintessential road-trip, my friend Beth Rera, her young son John, and I. We’re traversing the nation, literally, from coast to coast over an eighteen-day period.

I'd been charged with delivering some horses from the East Coast to the Santa Barbara area of California. I also picked up a job to ship some furniture from Middleburg to its owner in Albuquerque, and some stuff' for the return trip back east. It's sort of the tale that creates road legend, this nearly 6,000-mile journey crossing the spine of the U.S.

We're stopping along the route westbound with friends (I-70 route, primarily) and eastbound at several commercial horse hotels (I-40 route.) It is a three- to four-day journey no matter what, each way, with forty-five-plus hours of driving in each direction. I like to think of it as a twenty-first century variation on Steinbeck's Travels With Charlie. Beth likens it to a version of Thelma and Louise minus the man-hating aspect. John considers it the opportunity of his seven-year life: the ultimate show-and-tell for the first-day of school next month. 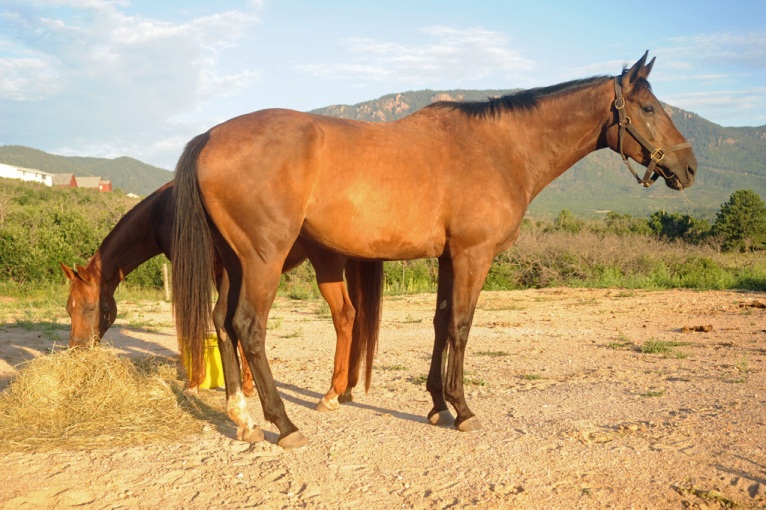 Kit (foreground) and Ali munch hay in the shadow of Mount Herman near Colorado Springs.

After a great day and nice early dinner with Mo and Jeannie Trail in Kansas, we were back on the road at 6:30 p.m., Tuesday evening. Kit and Ali had their dinner on-board (loaded up without complaint) and tucked into their hay as we headed out. They were like travel professionals. We, too. We had it down to a science: packing, loading, stopping every three to four hours for refueling (whether we needed it or not).

At the stops I start fueling, then carry the girls a snack (sloppy wet beet pulp) and refresh their hay and water. Every time I looked in on them they were cool customers, not a hair out of place, happy to eat, drinking well, interested but not loopy.

I'd gotten four brand new tires while in Paola to hopefully prevent more road-heat blowouts. The tire guy said my tires, while in good enough shape for winter hauling (mostly what I do), were not up to the relentless summer trip we embarked upon.