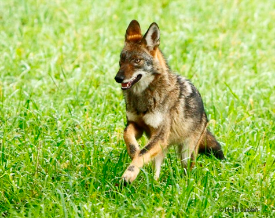 Jim Duggan photoAs a followup to Mark Twain’s rollicking description of the coyote and Susan Walker’s report on the Longreen Foxhound’s recent coyote chase, here’s further information about that secretive animal that provides so many North American hunts with their sport. I’m unable to provide a source reference for this excellent bit of wood lore, but if any reader recognizes it and can identify the source, we will publish that information in a future issue.

The coyote, Canis latrans, with its many varieties, known also as brush wolf and prairie wolf, is widespread and well known.

I sometimes think that the most conspicuous coyote sign is his night song. Certainly a camp on the plains in the Southwest or in the western mountains is cozier when enhanced by the serenade of coyote in the moonlight. He who would follow the mammals in the wilds should know something of the significance of this. Unaccustomed ears, trained by traditional journalism, might interpret the coyote voice as something doleful, a sad requiem that makes one crowd closer to the campfire. Or a flippant tongue might speak of the "yapping" of the coyotes.

But if the coyote could reflect and speak he would say this is his song, simply that. However it may appear to human ears, to the coyote it satisfies the universal impulse for expression of emotion, simple as that may sometimes be among furred animals.