Details
Literature
By Will H. Ogilvie

FHL features poems by the old masters every now and again. This one will raise the hair on the back of your neck!

There are many splendid moments ‘twixt the cradle and the grave
When a man may reach to rapture, but the one that I would crave
Is the moment when a whimper in a crash of music merges
And four hundred hooves are beating like the thunder of the surges
And the pack comes out of covert like the curving of a wave.

Something happened to William Butler Yeats on his way to becoming a painter...in the footsteps of his father. He decided he liked writing poetry better. Certainly he was a favorite of most of the English teachers I’ve ever had, but I don’t remember any of them assigning his foxhunting poems for study! Yeats was born in Ireland, so the foxhunting came naturally. 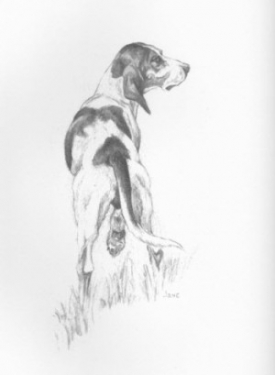 Lost Hound illustration by Jane Gaston from the book of the same name by Robert AshcomYoung Entry---a common phrase used to describe the puppies just entered into the pack. Very soon, most of us will be watching them with a mixture of curiosity and expectation. To the huntsman, they hold the keys to his future successes or disappointments; to the Masters they are the ratification or the despair of their breeding philosophies; to those members of the field who have walked hounds, a few are dear and even exasperating friends known practically from the cradle; to most fieldmembers, they are a curious batch of newcomers from whom much is expected. But imagine entering the pack from the puppies' point of view---suddenly turned loose for the first time midst a bewildering flurry of horses, staff, new sounds, and new sights. After a year of control and repression, the puppy is now free to blossom into the being its up-to-now-stifled genes have urged it to be. How frightening and at the same time how exhilarating! And then the moment when, experimenting with its freedom and following its nose, it suddenly finds itself completely alone for the first time ever. And utterly lost. Here's a sympathetic look by Will Ogilvie.

The winter sunset lit the leafless trees
With gold and crimson as the short day waned;
The wind had ceased its plaintive melodies;
The woodland darkened, and deep silence reigned.

Then sudden from the firs there rose a wail,
A cry that shook the heavens with distress;
A lost hound stood, one foot upon the rail,
Telling the crescent moon his loneliness. 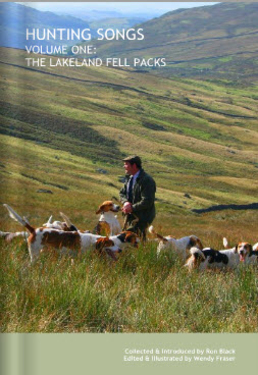 Or perhaps I paid special notice here because I now happen to be the smitten owner of a nine-month-old Border terrier whose ancestors scurried in their determined fashion over those same fells on the English-Scottish border. Here’s the story of Badger and Butcher by Mr. and Mrs. Curry, and it’s still sung today!