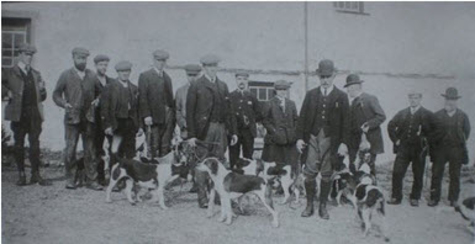 The Windermere Harriers at the Mardale Shepherds Meet, 1899

Here’s Chapter 4 of The Mardale Hunt by Ron Black. Through the courtesy of the author, Foxhunting Life is bringing you the entire book in installments every two weeks. You are free to download the book to your computer. We hope you have enjoyed the previous installments.

Excerpt from Chapter 4
This chapter recalls many of the hunts at Mardale. German Kaiser Wilhelm II visited Lakeland on holiday on a number of occasions from 1895 onward, staying with The Earl of Lowther, then Master of the Quorn in Leicestershire. The Kaiser met Ullswater huntsman Joe Bowman and may have hunted with him, for Bowman family lore has the Kaiser slipping Bowman a five-pound note.

Author Beatrix Potter was in Lakeland on one occasion when the Kaiser was due to arrive and wrote the following entry in her diary:

“Tuesday August 15th 1895. We consumed three whole hours waiting to see the Emperor, not very well worth it. I had seen him in London. I think he is stouter. I was not particularly excited. I think it is disgraceful to drive fine horses like that. First came a messenger riding a good roan belonging to Bowness, which we could hear snorting before they came in sight, man and horse both dead-beat. He reported the Emperor would be up in ten minutes, but it was twenty.

The procession consisted of a mounted policeman with a drawn sword in a state approaching apoplexy, the red coats of the Quorn Hunt, four or five of Lord Lonsdale’s carriages, several hires and spare horses straggling after them. There were two horses with an outside rider to each carriage, splendid chestnuts thoroughbreds floundering along and clinking their shoes.

They were not going fast when we saw them, having come all the way from Patterdale without even stopping at Kirkstone to water the horses, to the indignation of mine host, and an assembly of three or four hundred who had reckoned on this act of mercy. I think his majesty deserved an accident and rather wonder he didn’t have one considering the smallness of the little Tiger sitting on the box to work the break.”