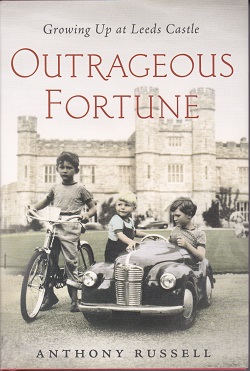 Outrageous Fortune: Growing Up at Leeds Castle, Anthony Russell, St. Martin’s Press, New York, 2013, 306 pages, Illustrated, $26.99Imagine having two grandmothers who both live in their own castles. Anthony Russell, a writer, musician, and composer in Los Angeles, comes from a family that served England’s kings and queens for five hundred years, which left them very, very wealthy…wealthy enough for his grandmums to purchase castles in England and Ireland.

Russell tells the story of a childhood at the highest levels of British aristocracy in Outrageous Fortune: Growing Up at Leeds Castle. His father, Lord Ampthill, was Prince Philip’s roommate at boarding school. Lord Ampthill also was known as “the Russell baby,” whose paternity and conception were at the heart of a sensational divorce case in the 1920s and a court challenge to his right to the title.

Lord Amptill’s mother (Lady Ampthill, she of the castle in Ireland) swore that he was the son of her husband, despite the fact that their marriage was never fully consummated. (It all had something to do with a bath sponge.)

Lady Ampthill (the author's grandmother) was a well-recognized figure hunting with the County Galway Foxhounds (the Blazers). She rode side saddle well into her later years, until suffering a fatal accident in the hunting field in 1976.

# K R 2014-04-07 19:06
I'm in awe of how well and fearlessly Lady Ampthill hunted side saddle!
Reply
Refresh comments list
RSS feed for comments to this post