Details
Art
By Book Review by Martha A. Woodham Country Pursuits: British, American and French Sporting Art from the Mellon Collections in the Virginia Museum of Fine Arts, by Malcolm Cormack, Published by the Virginia Museum of Fine Arts in association with the University of Virginia Press, 2007, 474 pages, illustrated, $62.00What a debt we all owe the late philanthropist Paul Mellon, whose love of horses and horse sports was expressed through the fabulous art collections that he so generously shared with us.

The Eclipse Award-winning breeder saddled legendary Thoroughbreds Sea Hero, Arts and Letters, and Mill Reef, just to name a few. His first British art purchase, in 1936, was a painting of a racehorse, "Pumpkin with a Stable-lad" by George Stubbs, said to be his favorite painting by one of his favorite artists. Pumpkin won sixteen out of his twenty-four races at Newmarket turf in the late 1770s and was described as an excellent runner.

“It was my very first purchase of a painting,” Mellon recalled later, “and could be said to be the impetus toward my later, some might say gluttonous, forays into the sporting art field.”

That Stubbs painting was donated to his alma mater, Yale, but the Virginia Museum of Fine Arts was another lucky recipient of Mellon’s “gluttonous” obsession with sporting art. Mellon’s donations are explored in Country Pursuits: British, American and French Sporting Art from the Mellon Collections in the Virginia Museum of Fine Arts by Malcom Cormack. Cormack was the Paul Mellon Curator at the VMFA in 1991 until his retirement in 2004. He also once served as the Curator of Paintings at the Yale Center of British Art established by Mellon.

Maureen Riley and the Zennor Fox 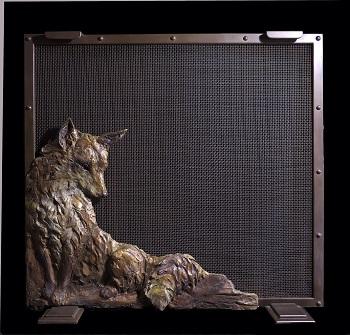 “I felt that the story of the Zennor fox needed to be remembered,” writes Michigan artist Maureen Riley. “It tells the story of a fox, but more than that it tells of a sportsman’s love for a good day of sport and a sense of fair play.”

Maureen Riley is a sculptor and painter who has been steeped in the sporting life from an early age. She learned about gun dogs from her grandfather and about sculpture from his friend, Walter Midener. Shooting, fishing, and horses have always been a part of her life, and country sports are at the root of her art.

From her studios in Michigan, Maureen has exhibited her work at Safari Club events and at international exhibits in both Milan and Portofino, Italy. Her work has also been shown at the Smithsonian. She is a member of the Society of Animal Artists and the National Sculpture Society.

Maureen has just created an interesting new platform from which to present her bronze works—a fireplace screen that serves as a blank canvas for her limited edition and custom relief sculptures. Her first design on this “blank canvas” is titled the “Zennor Fox.” The work was inspired by a 1913 foxhunt with the Western Hounds near Zennor Hill in Cornwall. Here’s the conclusion of the hunt as written by a participant, the renowned English equine artist Sir Alfred J. Munnings. 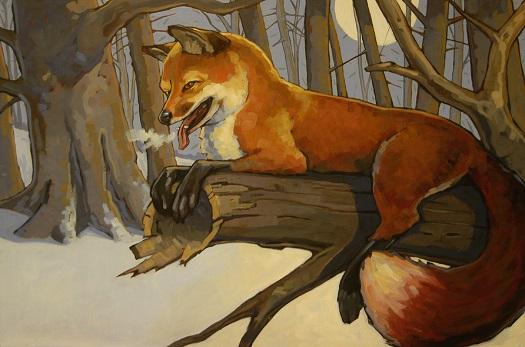 Hunters Moon by Will Ersland, courtesy of Cindy Piper, MFH, Long Lake Hounds (MN) Someone once told Will Ersland, “The horses and people in your paintings have great action—even when they’re standing still!"

Ersland sees himself as a visual journalist. “My paintings record a moment in time,” he says. “They are cropped the way I see the action, and each brush stroke is laid down with confidence and purpose based on my academic background and decades of drawing and painting.”

Ersland’s use of short, flat, planar brush strokes to highlight rounded shapes strikes me as an effective and unique element of his style.

“My style is dictated by the medium—acrylic paints—which dry very fast,” he explained. “I don’t even try to blend them. Instead, I build up form by starting with the darkest values and layering on the lightest values, usually following the form of the object with my brush strokes.

The Charm of Watercolor 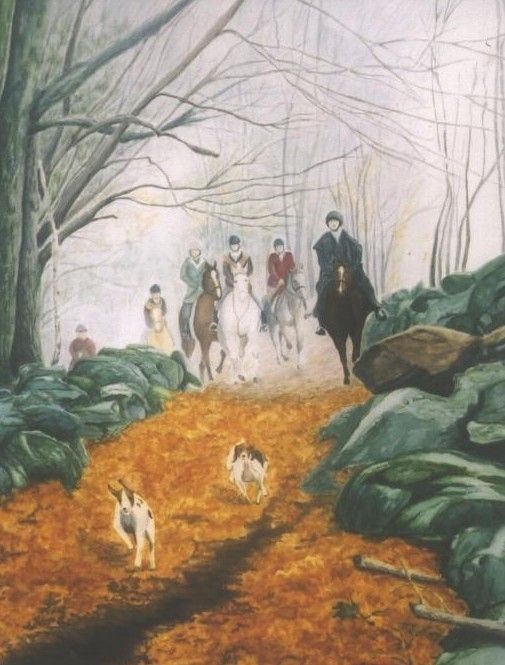 I try to reveal the beauty of nature in my artwork through realism. From a young age I was drawn in by nature and my surroundings, from hiking in the woods to being an avid lover of animals and flowers. As I grew I became quite eclectic in my pursuit of art, but watercolors have remained my favorite medium with their opaqueness that can be full of surprises. Watercolor courses filled all my electives in college as I finished my degree in Psychology.

For twenty years now I have painted my own Christmas cards each year. Many of them were of animals, flowers, lighthouses or covered bridges. I became interested in foxhunting when a close friend and my daughter began actively foxhunting in the New England area.