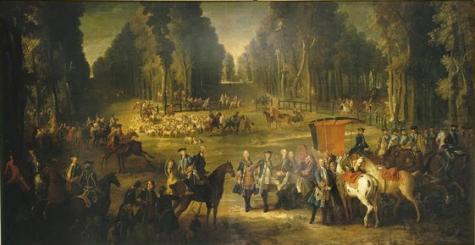 Rendez-Vous...in the Forest of Compiegne: preliminary painting for the tapestry by Jean-Baptiste Oudry at Fountainebleu

As a John H. Daniels Fellow at the National Sporting Library in Middleburg, Virginia, last fall, I did research concerning a series of nine large tapestries woven for Louis XV between 1736 and 1753 at the Gobelin manufacture. Called The Royal Hunts or The History of Louis XV, these tapestries decorated Louis XV’s favorite hunting chateau at Compiègne, just north of Paris. The artist who designed the tapestries, Jean-Baptiste Oudry* (1686-1755), was the official painter of the royal hunts who followed the hunt as part of the king’s entourage. He also painted numerous portraits of the royal hunting dogs.

Louis XV was known for his love of the hunt, and the series was meant to document the ritual of the hunt, the well-managed royal hunting grounds, and, of course, to glorify Louis XV. In the tapestries, as well as in the preliminary paintings for the tapestries now at the chateau of Fontainebleau, there are recognizable portraits of Louis XV, his hunt officers, his favorite horses and dogs, and specific sites in the royal forests of Fontainebleau and Compiègne. I was endeavoring to learn exactly what was transpiring in the images by consulting the eighteenth-century hunt treatises and manuals in the collection of the National Sporting Library.