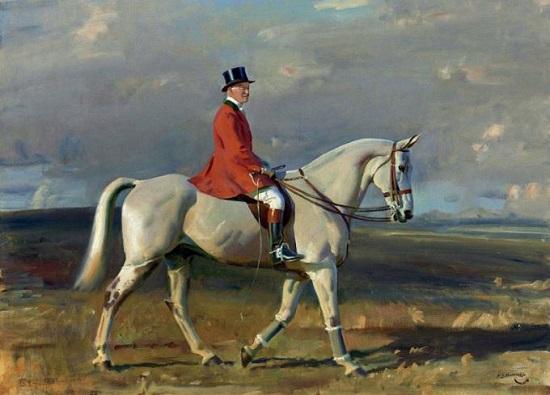 Portrait of Harry La Montagne on a Grey, by Sir Alfred James Munnings

A 1920s work by famed equestrian artist Sir Alfred Munnings is estimated to fetch between $300,000 and $500,000 when it goes under the hammer at Christie’s in New York later this month. Titled, Portrait of Harry La Montagne on a Grey, the painting will be auctioned on October 26 during Christie’s sale of 19th Century European Art.

Munnings stayed with Harry and Beatrice La Montagne at their house, the Villa Regina in Pau, southern France, during the autumn of 1923 to paint Mrs. La Montagne’s portrait on horseback. This followed a recommendation to Munnings from Baron Robert Rothschild who described her as “a good-looking, smart, American woman. The well-turned-out lady was supplied by her devoted husband with superb horses.” (Sir A.J. Munnings, The Second Burst, Bungay, 1951, p. 100).

# Denya Massey 2016-11-08 16:56
What did the painting bring when the hammer fell??
Reply
# Norman Fine 2016-11-09 10:23
I can't find where it went through the sale as advertised. Perhaps it didn't bring the minimum? Call Christie's; make them an offer!
Reply
Refresh comments list
RSS feed for comments to this post