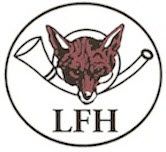 “We now have twice the country and twice the membership at one-half the cost,” said Donna Rogers, MFH of the newly merged Loudoun Fairfax Hunt. “It was a no-brainer!” Good sense notwithstanding, the courtship that finally resulted in an official union of the two hunts—Loudoun West and Fairfax—lasted two years.

“We had a long engagement,” agrees Rogers. “We hunted together, we socialized together, and we became happier and happier with each other.”

“The hardest issue was that of the huntsman,” said Rogers. “If we retained either of the existing huntsmen and let the other one go, there would have been great unhappiness on the other side. We decided that the fairest to both memberships would be to start with a clean slate.”

As a result of that difficult decision, British-born Andy Bozdan becomes the first huntsman of the Loudoun Fairfax Hunt. (Click to read an amusing anecdote from Andy’s days as a whipper-in.) Foxhunting Life has already reported on the round-robin of huntsmen changes set off in part by the Loudoun West-Fairfax merger. (Click to read Huntsmen on the Move and New Huntsman at Loudoun.) 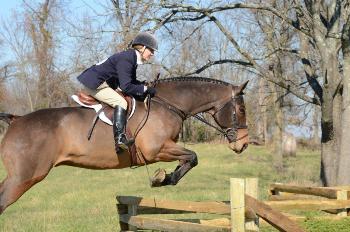 Kathleen O’Keefe, riding for the Casanova Hunt, was Reserve Champion. Best Turned Out was won by Helen Brettell of Middleburg Hunt.

The Virginia Field Hunter Championships were hosted this year by the Fairfax Hunt at Winter Farm in Middleburg, as a result of Fairfax member Karyn Wilson's win last year. 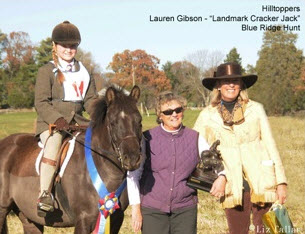 (l-r) Lauren Gibson and Landmark Cracker Jack, winner of the Hilltopper Division; Iona Pillion; and Douglas Wise-Stuart, MFH / Liz Callar photoThe tenth annual Junior North American Field Hunter Championship competition is in the offing with this year’s finals scheduled for Sunday, November 4, 2012 at the Radnor Hunt in Chester County, Pennsylvania. What started in Virginia has now spread to neighboring mid-Atlantic states and the number of participating hunts continues to grow.

More than a competition, the main purposes are to expose foxhunters eighteen years of age and younger to a variety of hunting countries, to instill in their young minds the importance of open space preservation if our sport is to continue beyond their lifetimes, and to stress suitability of mount to rider. The concept was hatched ten years ago by Douglas Wise-Stuart, MFH and Iona Pillion, both renowned for their junior foxhunting programs. 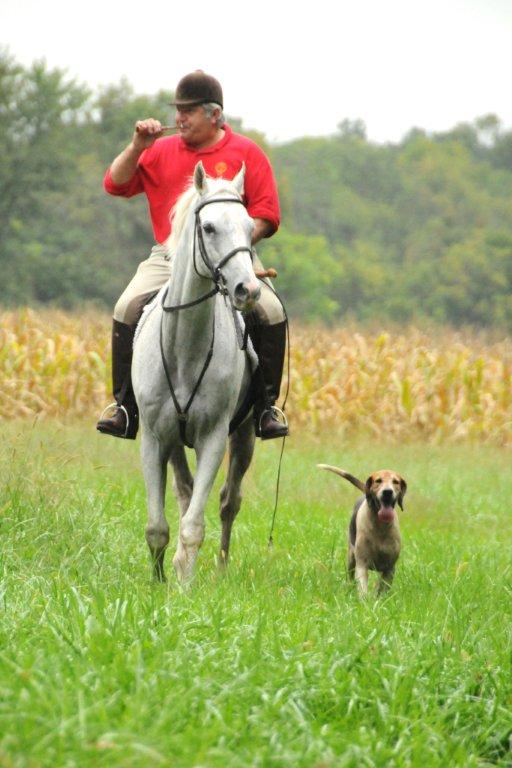 Liz Callar photoCongratulations to Tommy Lee Jones, the first recipient of the Ian Milne Huntsman’s Award, presented by the Masters of Foxhounds Association on Saturday, April 21, 2012 at the Biennial Staff Seminar dinner. Jones has hunted the foxhounds of the Casanova Hunt (VA) with distinction since 1970.

The award is named for the late Ian Milne, popular huntsman for the Fairfax Hunt (VA), to recognize and honor those professional huntsmen who have made outstanding contributions to the sport of foxhunting.

Concerned horsemen were mostly mollified by the message from Morven Park officials in a pair of meetings held last week. While the plan is to make a wider public use of the Leesburg, Virginia property, it appears that the only equestrian casualty will be the steeplechase racecourse. Other equestrian facilities will be continued and even improved.

Park officials said that the steeplechase races never made money, and the decision to close the track was strictly economic. The Fairfax Hunt Point-to-Point Races, to be run in April of this year, will utilize the racetrack for the last time. Preliminary plans call for a grand prix course to be built in the infield area.

The Virginia Foxhound Show held each year over the Memorial Day weekend will continue, according to officials. The cross country schooling course will remain, and horse trial events will continue to be held. Horse show and dressage arenas will be relocated closer to the stables, and the indoor arena will be refurbished. The stable that was destroyed by fire last year will be rebuilt. The Loudoun Therapeutic Riding Foundation will be allowed to expand to accommodate more users, and equine therapy for wounded servicemen may be introduced.