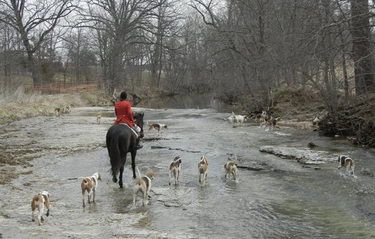 Huntsman Eleanor Hartwell and houndsThe Bridlespur Hunt was founded in 1927 with the inspiration, support, and assistance of the late much-loved gentleman and sportsman, Mr. August A. Busch, Sr., with an original draft of hounds from the well-known Joseph B. Thomas-Percy Rockefeller pack at Overhills, North Carolina. The pack consisted entirely of American hounds, or, as better known, Virginia hounds. The hunt was recognized by the MFHA in 1929.

By careful breeding, observation, and culling of the less desirable, the two early guiding spirits of the hunt, Mr. August A. Busch, Jr. and Mr. Adalbert von Gontard, Sr., developed a pack with most excellent nose and voice. They began to hunt the area of west St. Louis County, with kennels on Squires Lane in Huntleigh. The Bridlespur hounds have gone out twice a week since that time, even during the war years of 1941 to 1946, when a great many hunts in this country were forced to cease activities.

After the development of west St. Louis County began making it impossible to foxhunt, under the leadership of Andrew J. Shinkle, MFH and James B. Orthwein, MFH new kennels, clubhouse, and skeet shooting range were completed in St. Charles County, and the country west of Weldon Springs, which includes the vast Busch Wildlife Area, was opened and paneled.

Through the years English foxhound bloodlines have been bred into the pack, developing an excellent Crossbred pack. Many hunts throughout the country have found it necessary to cross their American hounds with English hounds to obtain more control. This has become more important as the rural areas have developed and highways have appeared. The English hound is more acceptance of discipline and control, and crossbreeding has helped in this area without sacrificing the voice and drive of the American hound.

The Bridlespur Hunt is involved in many endeavors throughout the year other than actual foxhunting. We make our facility available to many organizations to further the proliferation and enjoyment of horse-related activities in the St. Louis area. In addition to our annual Bridlespur Charity Horse Show, we hold schooling shows, hunter paces, and hunter trials, all of which are open to the public.

Our membership consists of a cross section of businessmen and women, professional persons, housewives, students, etc., all bound together by their love of riding to hounds or simply their interest in belonging to a group who loves the outdoors and takes pleasure in horse-related activities.

The Old Coop on My Half Farm

My Half Farm, in Wentzville, Missouri, was a part of the main fixture of the Bridlespur Hunt Club (IL) from 1957 to 2006, before urbanization forced the club to relocate further west. My Half Farm is still home to hunt horses, the My Half Farm Beagles, and is a regular fixture for the Three Creek Bassets. The Old Coop on My Half Farm

The Old Coop she stands bended, a dip across her bow
Where time has weathered wood, barely even two-six now.
Many years have passed and she beckons as if to say,
Do you remember when the hunters came my way?

The Old Coop sits heavy, where imposing she once stood.
Many a hunter snapped his knees, back when times were good.
Up and over they did go, landing downhill, facing north.
Over I've flown many times on beasts now left this Earth. 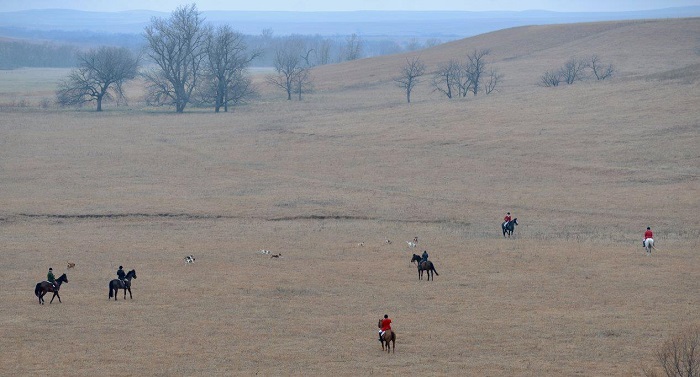 "Don’t like hobbles and I can’t stand fences; Don’t fence me in!" A song that could have been written in the tallgrass prairie of Kansas. / Julie Honsinger photo

The MFHA Hark Forward Performance Trial Series took participants to the prairies of middle America, a unique experience. I love the traditional hunt countries on the East Coast with large forests and big open fields, and I also love the totally different experiences of hunting in land where it is so wide open you can literally see for miles in every direction. Here, in the wide open expanse of the Kansas prairie, field members get to see most all of the hound work.

By the time it was over, everyone took home a renewed appreciation for the hard work and knowhow it takes to make and maintain a good hunting pack of foxhounds. Certainly the fact that littermates brought up by different hunts and trained by different staffs, rose like cream to the top of the scoring is convincing proof that breeding matters! Next stop on the tour is Millbrook, New York.