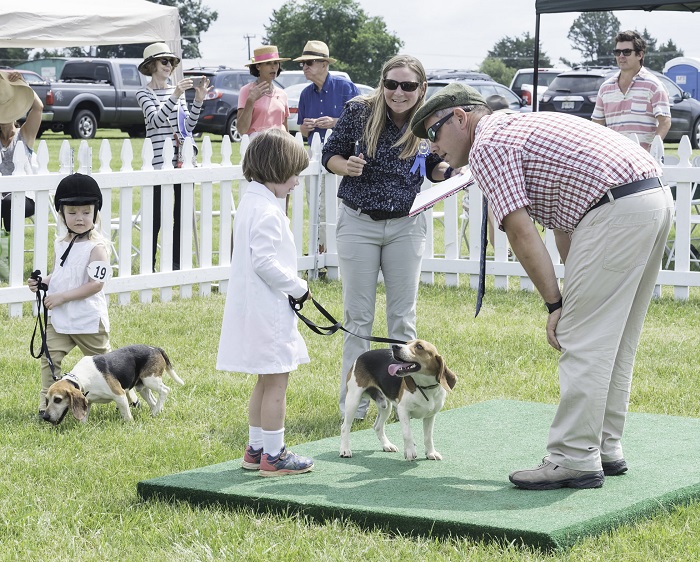 Judges Graham and Sheri Buston make certain that every competitor at the Junior Handlers Hound Show gets their undivided attention and assistance. / Rick Stillings photo

The emphasis was on creating a fun, welcoming day for juniors from any background—even those with no previous foxhunting or hound showing experience. Keeping with this accommodating theme, organizers invited bassets and beagles to compete, as well as foxhounds.

Judges Graham and Sheri Buston, huntsman and whipper-in at the Blue Ridge Hunt, perfectly combined cheerful patience and helpful suggestions with keen professional eyes for pinning the best exhibitors in each event. Foxfield Racing Association kindly offered use of their lush green course just outside Charlottesville as the beautiful venue. 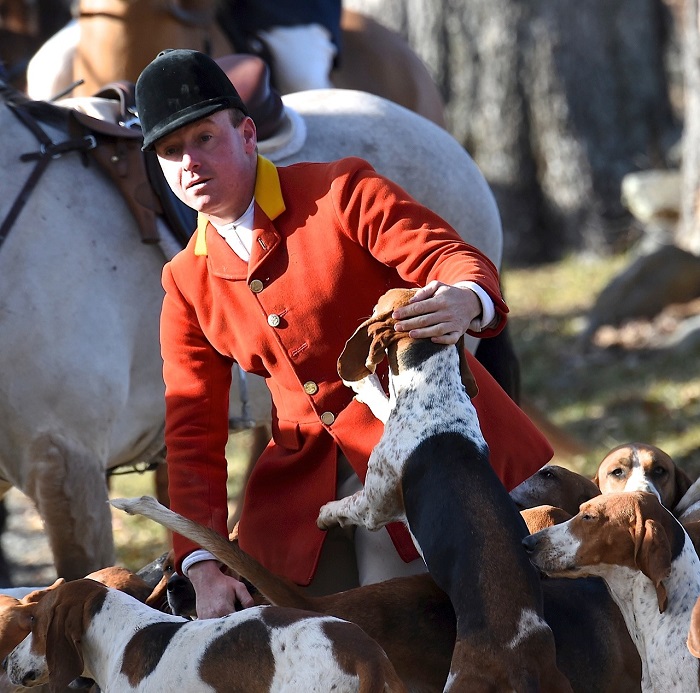 This oil painting by Linda Volrath is a reminder of the cruel winds and sometimes worse weather that prevailed at the Blue Ridge Hunt point-to-point on that first weekend in March every year. With the new late-April race date, such days on this excellent viewing racecourse are now just a memory...it is sincerely hoped.The Blue Ridge Hunt’s point-to-point course at Woodley has long been one of the favorite venues for race watching as far as view ability of the races are concerned. But the early March date on the Woodley hillside has had an equally long history of unforgettably uncomfortable weather, as Linda Volrath’s wonderful painting reminds us. The hunt’s new April date, which fell this year on Sunday, the 22nd, promises now to substantially improve the comfort aspect of the equation for viewers and participants alike. This year, it was a picture-perfect day for both horses and people, and a new look greeted spectators with vendor and sponsor tents, a food stand, stick pony races for the children, spring temperatures, and blessed sunshine.

Mouseover image and click play to view the entire sequence.  /   Douglas Lees photoEclipse Award winning photographer Douglas Lees shot this harrowing sequence of Elizabeth Scully when her horse Girlsruletheworld refused near the officials’ stand at the Piedmont Point-to-Point Races on March 24, 2018. The incident occurred nearly in front of Alexandra McKee on Alert N Ready, that pair making an amazing adjustment to avoid a pileup, get over the fence, and finish the race. The sequence is all the more dramatic for Scully’s calm demeanor on her way to the turf contrasted with the electrified expressions on the faces of the officials.

Scully and Girlsruletheworld won the Restricted Young Adult Flat Race at the Blue Ridge Point-to-Point in 2016 and were a competitive combination in the 2017 Lady Rider Timber point-to-points. McKee is a past winner of the Grand National Steeplechase on Narrow River in 2003 and placed second in the 2004 Maryland Hunt Cup behind Blair Waterman on Bug River.