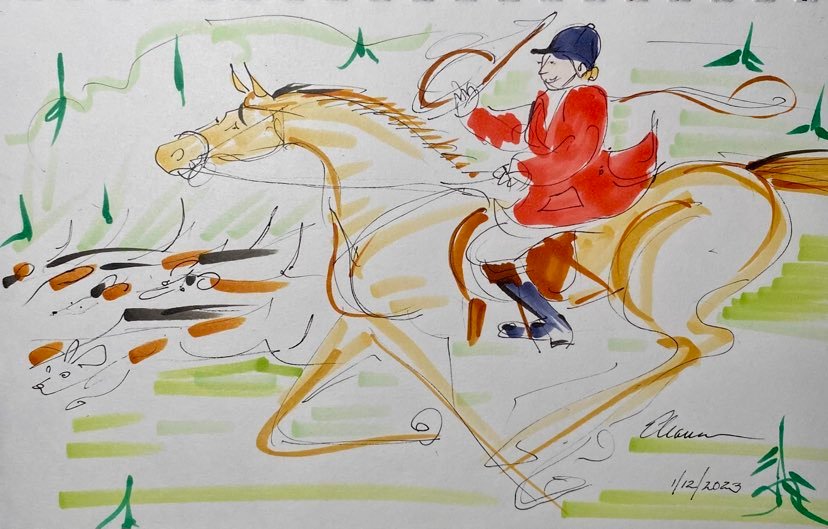 Jean Derrick, the long-time member of Belle Meade Hunt in Georgia and former Master of Foxhounds for two South Carolina foxhunts, Whisky Road and Edisto, passed away on January 11, 2023, from injuries sustained from a fall in the hunt field. Jean was a larger-than-life icon of foxhunting, known from coast to coast. To call her an ambassador for the sport of Riding To Hounds would not be hyperbole. Jean led Belle Meade Hunt’s First Flight for many years with great skill and eye-watering speed. She was a constant figure with the Performance Hound Trials, traveling to many of the Trials all over North America for several years as the official scorer.

Her high level of riding, the exemplary horse flesh she always rode, her impeccable turnout, and her extraordinary intelligence all pale to the sheer force of her passion for foxhunting. If one ever got to meet her just once, then she most assuredly made an impression that was never forgotten.

Jean touched so many lives at so many hunt clubs across the continent. There have been so many tributes to this Grande Dame of North American foxhunting that have popped up on social media in the last few days. Eleanor Hartwell, Professional Huntsman for Bridlespur Hunt in Illinois, did the beautiful artwork featured above of Jean just after hearing the news. I had intended to feature some of the tributes out of the multitude, but honestly, it’s a bit overwhelming. Instead, I will just give an account of how I knew this lady.

About a dozen years ago, my then-hunt, Tennessee Valley Hunt, started the now long-standing tradition of having a joint meet with Belle Meade down in Georgia. Jean kept a fabulous hunt box right next to the Belle Meade Kennels. To say that this house was impeccable and a veritable foxhunting museum was on par with Jean’s style. She hosted the TVH members one night and introduced us to Syllabub.

It was heavy cream with enough Brandy to put hair on your chest. My memory is a bit fuzzy on the details, as one can imagine. Jean served it out of an antique sterling silver tureen covered in hunt scenes, because of course she did. And after the delicious Syllabub ran out? Well, then it was Hot Buttered Rum in pewter cups. We treasured these parties each year and felt so special that she had chosen us.

After years of annual joint meets with Belle Meade and Jean’s parties, she and I traveled with ten other foxhunters from across the Southeast to drive over 10,000 miles in 30 days to hunt from Georgia to the Pacific Ocean to roll out the Western leg of the 2018’s Performance Hound Trials. We hunted with 13 hunts on this trip, and yes, it was a trip of a lifetime.

Jean’s obituary has not been released yet, but I was told that Jean had always wished to have her ashes spread in the hunt country that she loved in Georgia. The details for this are still to be determined. She is survived by her son, Trent, who is expecting his first child in two weeks. Jean was so excited to be a grandmother.

Jean loved foxhunting with all of her soul, and honestly, I don’t think that it is crass to assume that this was the way she would have chosen to leave this earth. Riding to a crack pack of hounds, on her best horse, surrounded by her best friends. Kick on, Miss Jean. 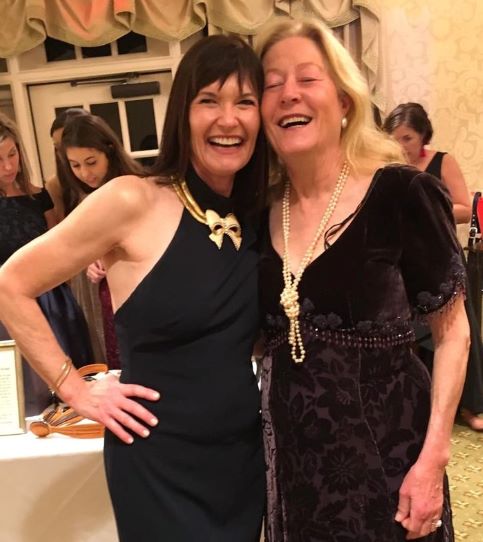 Allison Howell and Jean Derrick at the Belle Meade Hunt Ball - showing her love of life. Photo by Gretchen Pelham.