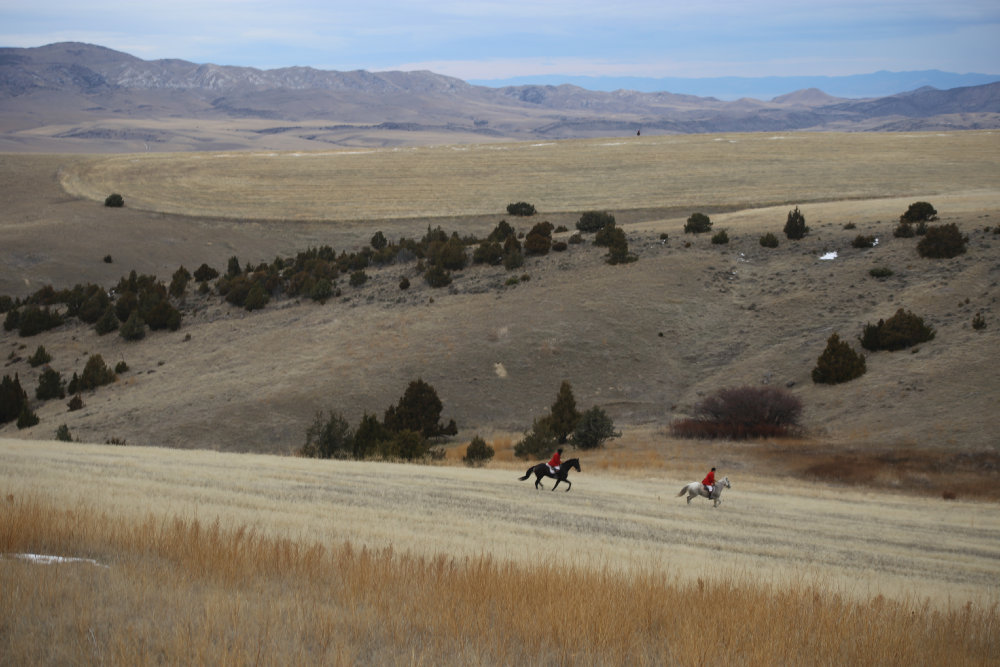 There are many commonly used phrases to warn fellow foxhunters of perils when riding outside of the arena. Such as “Ware wire!” and “Ware hole!”. Out West, there has been a worrisome increase in rattlesnake numbers during this Autumn Hunting season. The Big Sky Hounds just announced they must cancel their next hunt and will move some of their future fixtures due to increased rattlesnake activity. They had a horse and hound get bitten just this weekend. Also, a Big Sky Hounds member was recently bitten by the most venomous rattlesnake in the world, with a one-in-a-million adverse reaction.

Some research on bites from rattlesnakes with the Center for Disease Control found estimates that between 7,000-8,000 people are bitten by venomous snakes in the United States each year, with about five or 0.07% of those people dying. Horse mortality rates from snake bites are approximately 9%, mainly with small foals or unhealthy, elderly horses. Most horses get bitten on the nose due to their curiosity. This presents the complication of nasal passage swelling to a point that prevents breathing. The mortality rate for canines bitten by snakes is about 5%. There is a preventive vaccine and an anti-venom for canines. However, both options are so expensive that they are not practical for a whole kennel of hounds.

Fair Warning – the two stories below will have two photos of rattlesnakes. 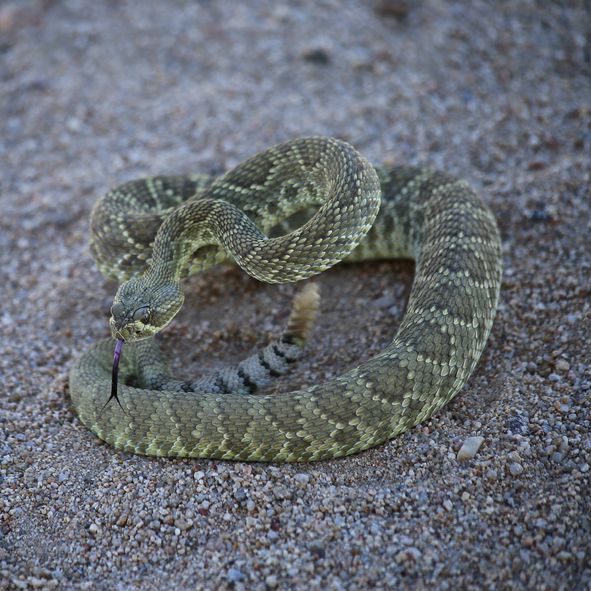 Cathy Evans has been a member of several foxhunts, including Big Sky Hounds. She was bitten just before the start of Autumn Hunting while in Reno, Nevada. Cathy grew up in the Florida bush and has a childhood history of catching and releasing rattlesnakes. Her routine was placing a shovel behind the rattler’s head while she grabbed it behind the jaw. Then she would put the snake into a pillowcase to transport it out of the way. Now, my mind is reeling from trying to imagine this procedure, but to Cathy this process is easy. However, there are no Mojave Green Rattlesnakes in Florida.

Mojave Green Rattlesnakes are regularly classified by experts as the deadliest rattlesnake species in the world due to their potent venom, which is notorious for causing difficulty breathing. They are also very aggressive. Left untreated, the Mojave Green’s bite is almost always fatal. Fortunately for Cathy, she was bitten on a ranch owned by Paulette Schneider, an EMT with an oxygen tank in the garage.

Cathy was asked to help move the snake away from the horse trailer’s ramp, however, her usual method of grabbing the snake with a shovel didn’t work. She was bitten on the thumb. Immediately, she went into anaphylactic shock. Of all the snake bites in the world, only one in a million bites will induce anaphylactic shock, and Cathy was the unlucky millionth. She had enough time to sit down in a chair a few steps away, but by the time she hit the chair, she was already unconscious. Within only a couple of minutes, Cathy was hooked up to the oxygen tank as Paulette and the local first responders waited for the helicopter ambulance to arrive. Cathy would most certainly have died long before the helicopter landed if it wasn’t for the on-hand oxygen tank and Paulette.

The hospital doctors in Reno had never seen an anaphylactic reaction to a snake bite. The reaction is so rare that there is very little research on how to treat the patient. The doctors went down a list, trying this and that. The Mojave Green anti-venom (at $32,000 a shot) was given with great caution, as the doctors were not sure if Cathy would be allergic to the anti-venom like she was with the venom. In the end, she was given two anti-venom shots, which did stop the spread of the venom within her arm. However, Cathy wouldn’t wake up. The doctors kept trying to take out the intubation tube in her throat, but the tissue kept swelling up. A tracheal tube was finally inserted. Cathy stayed in the ICU, unconscious, for almost two full weeks. In the end, she did wake up, and no one is confident about what exactly woke her up. After a few days of being semi-conscious, Cathy was aware and functioning. She came home a week after that and is almost back to riding again. If you are wondering what surviving a one-in-a-million bite costs, Cathy’s initial bill from the hospital is just shy of a half-a-million dollars.

The experience was harrowing but will end fashionably well as the four-foot-long Mojave Green is currently waiting in the freezer to become Cathy’s new belt! 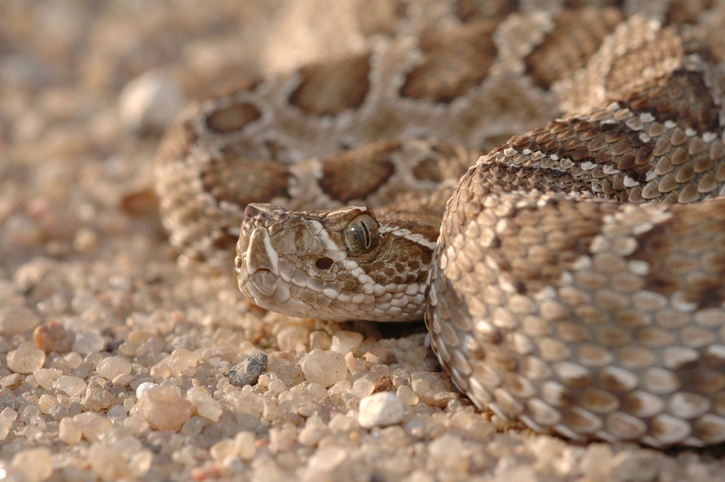 Renee Daniels, MFH and Huntsman for Big Sky Hounds in Montana had an exciting weekend of kennel management and Autumn Hunting. During Sunday’s sport, one of Renee’s Whipper-Ins called in a panic over the radio with, “I’m sorry but I have to leave you. I’m literally surrounded by snakes! I’ve got to get out of here!”. Renee looked over to her whipper-in to see the staff member galloping full tilt, presumably over a field covered in rattlesnakes. Renee herself had to move out of the way of five different rattlesnakes during the same day’s hunting.

Two Big Sky hounds were bitten by the local Prairie Rattlesnake while in their kennels and one of her hunt horses was bitten after Sunday’s hunting day. In 24 years of living in Montana and owning thousands of horses, it was only the second snake bite to one of her horses and the first for her hounds. Both the hounds and horse have been to the vet for care this week. Renee released the following notice to her hunt members this past Tuesday.

“Well, this is a first...tomorrow's meet is canceled due to rattlesnakes. After Sunday's numerous encounters with rattlesnakes while out with hounds, I also had a horse bit in that pasture. So, I did a little research into our friend, Crotalus Viridis, aka the Prairie Rattler.

Rattlesnakes are currently migrating to their dens for winter and taking advantage of the warm days to stock up on food. They are most active between 70 - 90 degrees, all year long (as they don't hibernate, instead they slow their metabolism in the cold). Rattlesnakes hunt mostly in the morning and at dusk when they can use their infrared heat sensors to detect prey. They can migrate over many miles and often return to the same dens year after year in the fall. They probably just had their baby rattles a few weeks ago, so the new crop is also out on the town learning how to be big.”

Rattlesnake bites on either horse, hound, or rider are still very rare. For those who are now unduly concerned about rattlesnakes biting them in their sleep, honey bee stings and lightning strikes kill twenty times more people annually than all the rattlesnake bites combined.